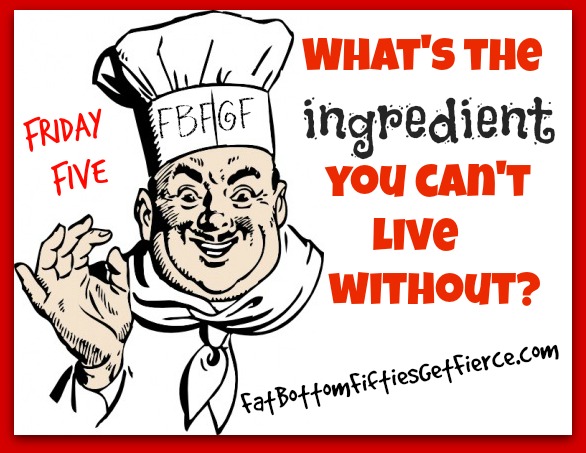 What is your go-to food prep ingredient? You know – the one that adds zing to what’s cooked, crunch to what’s not, or a bit of magic to what’s baked? That one ingredient you just can’t live without. OK – “can’t live without” may be a bit dramatic. Let’s put it this way: if you were taking a trip where you would have to prepare food (already provided!) at your destination and could only take one ingredient to add to it, what do you toss in your suitcase?

Here are my top five contenders:

5. Kale. I know – mere months ago I was balking at the thought of it being so pervasive it was  added to ice cream. But I have seen the light! I have gone from grudgingly tossing it into salads and smoothies as a virtuous nod to healthy eating, to feeling the fridge is bare without it. In addition to kale taking over my salads, it adds stamina to sandwiches and great texture to stir fry. I’m still not buying it as a dessert, though.

4. Garlic. It goes with everything. Some even swear it works with ice cream – although I haven’t tested that theory. So maybe I should say it goes with all things savory. It is the starting point to most of my cooked dishes and an accompaniment to many that aren’t.

3. Sliced almonds. I actually keep some in a ziplock snack bag in my purse. They add substance to yogurt and satisfying crunch to salads. A little sprinkling goes a long way and adds positive nutritional value for minimal calories.

2. Mace. There – it’s out. My secret ingredient for baked goods. It’s one of two secret ingredients for my stellar banana bread recipe. (No, I’m absolutely not divulging the second one!) For those of you not familiar with mace, I kind of think of it as nutmeg that’s been empowered. For a concise explanation of the difference between mace and nutmeg and what each works best with, click HERE. Good stuff!

But if I follow the rules I have asked you to follow by picking only one to toss in my suitcase? I’d have to go with:

1. Red pepper flakes. An absolute must for pizza paring, but a delightful optional contribution to so much more. They can turn bland into BAM! They add a controllable heat level to what was formerly flat. They add zip to soup, stews, eggs, bread – even chocolate. Those foil packets of red pepper flakes that are given away at pizza parlors (along with the parmesan cheese) can be found in my glove compartment, my office cupboard and my desk drawer. So please don’t take it personally if one happens to fall out of my purse while I’m eating dinner at your house – it’s no reflection on your cooking!

So what’s that one ingredient that YOU can’t live without?