I think we can all agree – books make great gifts and great gifts make great stocking stuffers! There is so much more to a book than the actual book. A book says an adventure awaits; cozy is just around the corner; make time for yourself; etc, etc, etc. Really, if you are fortunate enough to have some time off during the holidays, the anticipation of curling up with a good book and getting your winter time cozy on is such a treat! Here are a few suggestions for books we would love to find in our stocking this year!

1) Writers on Knitting – Ann Hood: Just looking at this book makes me want to both open it up and get started reading, and it makes we want to touch all the yarn in my craft room  – and then get started on a project! Think about how much writing has in common with knitting. Writers and knitters are both weavers, one of stories and one of projects. Also, there has to be a reason why good stories are often referred to as good ‘yarns.’ I found this as way of explanation : The difference between story and yarn is that whereas story is the conventional word for a fictional account, yarn often has the idea of a story told by a colourful character and it has a lot to do with the storyteller’s personality. When you hear the word “yarn,” you imagine a group of people gathering round to hear a story from someone who has had interesting experiences over a long time. and Merriam Webster defines a yarn as an interesting or exciting story.

I had not heard of this book before El tossed it my way, but I can’t wait to settle in and get my ‘yarnin’ on! 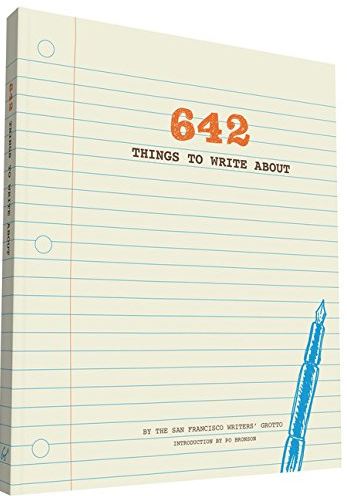 2) 642 Thing to Write About – San Francisco Writer’s Grotto and Po Bronson: Now that I’ve got my yarn ‘yarnin’ on, I could use a little nudge to get my word ‘yarnin’ on. Just like a ball of yarn can get me going on a project, a clever prompt can get me going on a story or blurb or post. I would imagine not all the ideas are going to generate fantastic tales, but what a great way to exercise our writing muscles. For the ‘writer’ in your life (we all know of at least one), stuff their minds with ideas for writing in the new year.

3) All the Light We Cannot See – Anthony Doerr: This one I have actually read and absolutely LOVED. I had recently returned from an unexpected and perfectly wonderful-in-every- way trip from Paris, so it was even more fun to read about the neighborhoods in which the story took place because I could think of them as they are now. But I digress. The story is told from two different vantage points – a blind girl in Paris and a young boy in Germany during World War II. Their stories briefly intersect and tell such amazing tales of hardship, loss, love, courage, and integrity that I was quite sad to end the book and thus my interface with their lives. Isn’t that always the way with a good book? This book won the Pulitzer Prize for 2015. It is just stuffed with wonderful imagery!

4) A Confederacy of Dunces – John Kennedy Toole : This title came to me by way of an NPR (National Public Radio) episode. I didn’t hear the title of the book, but came in as they were explaining it was initially being considered for publication by some ‘house’ in NY but it fell through and the author at some point committed suicide. His mother then took up the crusade of getting this book published which it eventually was – six years after Mr. Toole’s death. AND then it went on to win the Pulitzer Prize in 1981! What a testament of a mother’s love!!!  The NPR episode was actually about a cookbook that was published based on some of the food the characters stuff themselves with during the course of the story. I’m curious enough now to want to pick up this book at my local library (although Barnes and Noble is selling the hard copy for $1.99). Here’s the Barnes and Noble overview: Set in New Orleans, A Confederacy of Dunces outswifts Swift, one of whose essays gives the book its title. As its characters burst into life, they leave the region and literature forever changed by their presences – Ignatius and his mother; Miss Trixie, the octogenarian assistant accountant at Levy Pants; inept, wan Patrolman Mancuso; Darlene, the Bourbon Street stripper with a penchant for poultry; Jones, the jivecat in space-age dark glasses. Satire and farce animate A Confederacy of Dunces; tragic awareness ennobles it.

5)  H is for Hawk – Helen McDonald: This is definitely not a M is for Murder style book.  A New York Times review describes it as: Heart-wrenching and humorous, this book is an unflinching account of bereavement and a unique look at the magnetism of an extraordinary beast, with a parallel examination of a legendary writer’s eccentric falconry. Obsession, madness, memory, myth, and history combine to achieve a distinctive blend of nature writing and memoir from an outstanding literary innovator. That overview seems perfectly stuffed with intrigue! It came up on several top book pics for 2015.

I would love to have any of these books tucked away in my stocking to delight me on Christmas morning! I get excited about almost any book – couple that with the thrill of a new book (when I may actually have some free time to devote to the indulgence a good yarn brings) and I can’t believe my good fortune!

Here’s wishing you find all the stuff a great read can deliver!

What book would YOU like to find tucked in your stocking?

I have to confess that I don’t read as much as I used to, which is odd in a way as since I retired, I should have more time! I like books by Erica James and Cathy Kelly as I can identify with their characters who come across as real people. With the latter I have actually been to some of the places she writes about!
Books I would like though, that’s a toughie.
A friend gave me a cookery book of Spam recipes a few years ago, Hubby got a book on curries, and I won one on cake in a raffles. So anything to do with food I suppose, or dogs, but nothing sad. Marley and Me made me cry and I couldn’t watch the film.

Interesting – a Spam cookbook! I never appreciated the true value of spam until I lived in Hawaii and enjoyed the treat of a spam musubi while watching my daughters’ hula competitions! I wonder what else is in that cookbook of yours.

Well, we tried sweet and sour spam, and curried spam, not to mention the usual fried spam or battered spam, and spam in a cheese and mushroom sauce with jacket potatoes was quite nice too!

Fried spam on nice white soft bread is really delicious and most likely very unhealthy but I probably only indulge one every few years so I’m not too worried.
‘Jacket potatoes’ I ask?

You may know them better as baked potatoes, baked in the oven in their skins (nice bit of oil and sea salt on the outside to make them crunch up.

My stocking isn’t big enough to hold all of the books my heart desires.
I love writing prompt books. 🙂

My house isn’t big enough for all the books me heart desires!
I am hoping a writing prompt book will make a difference in my output in the new year!

Thank you – what an interesting load of books to add to the list! I will get books for Christmas – I always do [even though I haven’t finished reading last years stash yet] I never know what they will be and mostly enjoy them all anyway. It’s the blessing of having a daughter in the business 🙂 Merry Christmas and Happy Holidays to you both! xo

That is a blessing! I think we should always have a book or two in the house that we haven’t quite gotten to yet. It sets the stage for never-ending enjoyment.
Thank you and Merry Christmas to you and yours as well!

Well, I’ve read two of the books on your list and have that writing prompt book to delve into – so as far as I’m concerned, your choices are spot on! H for Hawk might very well be the best read this year…and all the Light we Cannot See was an excellent holiday read. Happy stocking stuffing!

Love that you have read H for Hawk. I hadn’t talked with anyone who had but it caught my eye. Now I can’t wait to see if it makes it here in time for Christmas. I second the excellence of All the Light…
Happy stuffing to you too! Thank you.

It’s wonderful. The sort of book that stays with you – and the descriptions of the English countryside are sublime.

Fascinating and diverse list, M. I’m intrigued by the prompts book for several reasons. A book I’d like to find is Anne Tyler’s latest. I’ve always loved what she does with characters. 🙂

I read ‘Breathing Lessons’ many years ago and do recall it as one that really spoke to me at the time. Hopefully you have dropped the hint – ‘A Spool of Blue Thread’ should be available out there. Coincidentally, that title ‘ties’ quite nicely with the theme of this post. Thread really could be considered very fine yarn 🙂 and I am sure the story is a very fine yarn 🙂

Reblogged this on sugarbaby56.

Thank you – much appreciated!

Thanks for sharing these interesting books. I have All The Light . .. on my shelf, just waiting to be read. I also have 642 things to write about, lol, and so busy with my writing that I haven’t had time in a year to touch it, lol. I’m thinking I’ll take it on holiday. 🙂 Happy holidays to you.

And Happy Holidays to you too. I do hope you get a chance to get to a good read over the holiday break. Thank you

That’s my Christmas wish 😉 Thanks for the laughs! 🙂